Between 2008 and 2012, GCHQ intercepted and stored the webcam images of millions of people as they had personal video chats with their friends and family via Yahoo.  The NSA uses a plug-in called ‘Gum Fish’ to obtain the vision of your device’s camera. Samsung’s Galaxy IV phone tracked our gaze to enable the scroll function to be activated with our eyes. Apple have just patented a screen technology that consists of thousands of tiny sensors all capable of camera abilities, so the camera is no longer something you can isolate and cover up.

The way that we visually present ourselves to others – our body language, facial expressions, eye movement – are all important sources of information for how we understand each other. Our faces communicate our reaction to stimuli with our minute facial cues revealing unsaid information stemming from our inner response. It is no wonder then that our webcams have an appeal to governing bodies, marketing agencies, tech firms and anyone interested in the study of human behaviour and psychology.

Shroud shows a collage of webcam footage projected onto a translucent shimmering veil, combined with a waterfall-like visual.

We often think of online surveillance as the gathering of keystroke data, internet searches, webpages visited, content posted and online friendship/associate connections, but camera footage reveals a whole other dimension of information about ourselves.

Whereas Narcissus and his obsession with his image reflected in the water led to his death, we record and gaze back at our image via the shiny screens of our phones and computers. The importance of how we appear online and the visual messages we send to each to other have clear repercussions on how people perceive us, for prospective, current and former contacts. It seems that our fascination with image and appearance has been manoeuvred into a relationship of sacrifice where the value of privacy holds a lesser sway. 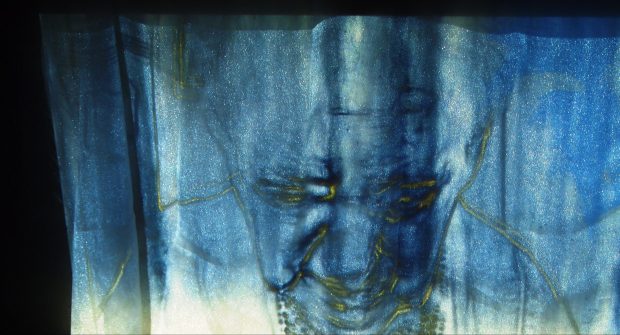 ← Terms & Conditions, + All Eyes on You, Dead Weight and Tetris
The effect of smartphones on mental health →

This site uses Akismet to reduce spam. Learn how your comment data is processed.